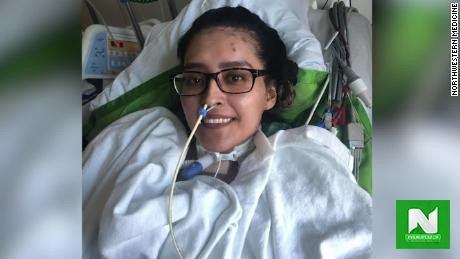 A 28 year old woman, known as Mayra Ramirez has become the very first Coronavirus survivor to receive a double lung transplant in the United States.

Ramirez, experiencing Coronavirus symptoms, arrived at the Northwestern Memorial Hospitals emergency room on April 26 and within minutes, her terrible experience with the disease began.

"All I remember was being put to sleep as I was being intubated and then six weeks of complete nightmares," she told CNN on Monday August 3, 2020.

"Some of the nightmares consisted a lot of drowning and I attribute that to not being able to breathe."

According to her, Covid-19 had irreversibly damaged her lungs and her other organs were beginning to fail.

Ramirez spent more than a month on a ventilator and doctors told her parents who flew from North Carolina to say a final goodbye to her as they were unsure if she would survive.

But doctors, gave a her a clinger of hope; A double-lung transplant was the only thing that could save her life.

"Without the transplant, she would not have made it," Dr. Ankit Bharat, the chief of Thoracic Surgery at Northwestern Medicine in Chicago said.

The fact that she was young and had no bad medical history, made her survival chances higher.

"I looked at myself and I couldn't recognize my own body," Ramirez said, after waking up in the hospital following her procedure.

"I couldn't talk, I could barely lift a finger, I couldn't move. I was in a lot of pain, I was very confused."

"This is not a hoax," she said. "This virus is real, it happened to me."mm

Two months since the surgery and Ramirez says shes still weak and struggling to breathe even as she rehabilitates at home.

Ramirez is now the first person in the US to have received a lung transplant while sick with Covid-19 according to the Northwestern Memorial Hospital.

About 4.6 million people in the US have been infected with Covid-19.

Air Peace sacks pilots over Coronavirus
These Were the Top 2 Nigerian Music Albums of 2021
Share to...