EndSARS: Sanwo-Olu Told Me Colonel Bello Was Shooting At Lekki - General Ndagi
By 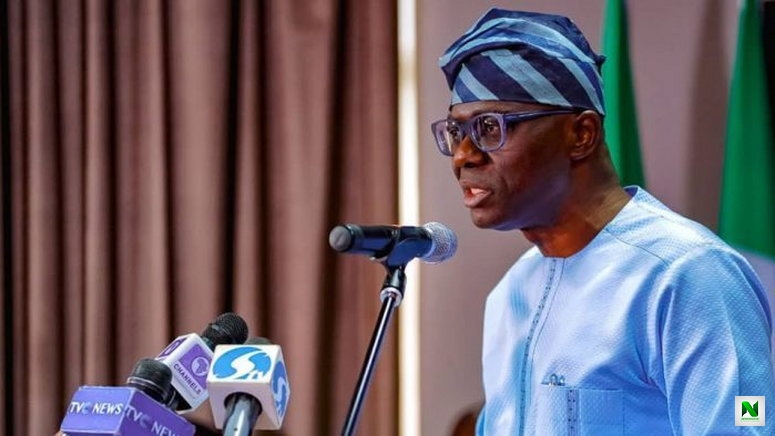 The Commander, 9 Brigade, Nigerian Army, Brig Gen Musa Etsu-Ndagi, representing the Nigerian Army on the Lagos State Security Council, has said he received a phone call from the Lagos State Governor, Mr Babajide Sanwo-Olu, around 7.23pm on October 20,2020 informing him that a certain Lt Col Bello was reportedly shooting at the Lekki tollgate where #EndSARS protesters were gathered.

Etsu-Ndagi said he immediately called Bello, who is the Commanding Officer, 65 Battalion, Bonny Camp, Victoria Island, and he (Bello) told him that he only fired blank ammunition into the air.

Etsu-Ndagi, who is one of the top four military officers listed as witnesses of the Nigerian Army before the Lagos State Judicial Panel of Inquiry probing the Lekki tollgate shootings, stated this in his statement on oath filed at the panel’s registry on Friday.

The top Nigerian Army officers insisted that soldiers never shot at or killed anyone and there was no massacre at the Lekki tollgate on the night of October 20.

They vehemently denied using live ammunition on the #EndSARS protesters who gathered at the tollgate, adding that soldiers did not take any dead bodies away.

Bello said the protesters were, in fact, happy to see the soldiers at the tollgate, adding that he personally offered the protesters water and drinks while persuading them to go home and observe the 24-hour curfew declared by the Lagos State Government.

Specifically, Omata and Bello told the panel that by the time they arrived at the tollgate, the protest had turned from peaceful to violent.

They said on arrival at the tollgate, they were being pelted with stones and broken bottles and that in response all they did was fire blank ammunition into the air to disperse the crowd.

Omata said, “On arrival at the tollgate at about 7.30pm, I met a rowdy situation. I also met the Commanding Officer, 65 Battalion (Bello), who briefed me on the situation. He briefed me that he met a hostile crowd, hoodlums mixed with the protesters, who were chanting and throwing stones at them. I was able to disperse the crowd by firing blank ammunition into the air.

“At this point, stones and sticks were being thrown at us. Then I moved to a safe area and briefed General Officer Commanding 81 Division, Maj Gen Godwin Ahamefuna Umelo by phone.

“The General Officer Commanding directed me to pacify the hostile crowd and move the troops back to base. However, the crowd still continued chanting #EndSARS. I then instructed the troops to withdraw to base.”

Giving his own account of the incident, Bello said while he was moving towards the Lekki-Ajah Expressway at around 6.45pm, he heard gunshots before the tollgate and on coming down he saw that “the crowd had turned from peaceful protesters to a mob, infiltrated by hoodlums.”

He said, “On getting to the tollgate, I persuaded the crowd to go home and observe the 24-hours curfew declared by the state government. But surprisingly, the hoodlums continued throwing stones, bottles and other dangerous objects at us and were burning tyres. I again fired some blank ammunition upward to scare the hoodlums away. But some protesters who were still at the tollgate sitting down quietly were given water and drinks by me while pleading with them to go home.”

Bello stressed that “we did not fire at the protesters. Blank ammunition were fired upward to scare the hoodlums from the crowd. Nobody was shot dead at the Lekki tollgate, there was no massacre as claimed. The claim that the military took away dead bodies was not true. The protesters were happy to see us as indicated in some of the video clips of 20th October 2020.”

The sitting of the Lagos State Panel of Judicial Inquiry probing the alleged shooting of #EndSARS protesters at the Lekki tollgate was frustrated on Saturday due to the absence of the two youth members of the panel, Oluwarinu Oduala and Temitope Majekodunmi.

Oduala, who is one of the promoters of the #EndSARS protest, failed to show up for the Saturday sitting in protest against the freezing of her bank account by the Central Bank of Nigeria.

The PUNCH had reported that the CBN obtained a court order freezing the accounts of 20 #EndSARS promoters till January 2021. One of those affected was Oduala.

The chairman of the judicial, retired Justice Doris Okuwobi, said the panel had no other option but to suspend Saturday sitting as it could not form a quorum in the absence of the two youths.

Justice Okuwobi said, “We are confronted with a situation which prevented her (Oduala) from coming. We do not know if the two youths’ representatives will eventually pull out.

“We don’t want a situation where proceedings would go on and later it is impugned with controversy for lack of quorum.”

Justice Okuwobi stressed that it was important for all the sittings of the panel to be held in accordance with the law.

“In all matters, we have to wait for them (youth representatives) to join us. Without them, we are handicapped,” she said.

The panel scheduled Saturday to take the testimony of the Nigerian Army on the October 20 shootings by soldiers at the Lekki tollgate in Lagos.

A soldier had already taken the witness stand when before Justice Okuwobi announced that the sitting could not proceed.

Responding, counsel for the Nigerian Army, A. T. Kehinde (SAN), who explained that the army’s appearance on Saturday was pursuant to an October 28 summons by the panel, appreciated the panel for explaining its challenges to everyone.

He asked to be guided on the next date his client would appear before the panel.

“The issue of a quorum is if utmost importance as to the competence of the panel to proceed and as to the integrity of recommendation to be made at the end of proceedings.

“Therefore, the directive for the panel to adjourn is quite appropriate,” Enitan said.

Counsel for #EndSARS protesters, Mr Adesina Ogunlana, described the development as an embarrassment to both the panel and lawyers.

Ogunlana, who claimed to have privileged information about plans to disrupt the panel sittings using thugs, advised the panel to be proactive and to ask the government to do the needful.

“Government cannot approbate and reprobate. This disconnect must be addressed immediately,” he said.

Also, a Senior Advocate of Nigeria, Adeyinka Olumide-Fusika, who said he was before the panel on behalf of some victims who wanted to make a presentation before it said he would need the panel’s directive in view of the development.

Justice Okuwobi adjourned further sitting of the panel till next Saturday, November 14.

The panel had on Friday fixed next Tuesday, November 10, to continue the viewing of the video footage of the Lekki shootings submitted by the Lekki Concession Company, operator of the tollgate.

In an interview with journalists, the #EndSARS protesters’ lawyer, Ogunlana, said the freezing of the bank accounts of the promoters of the protests had substantiated his submission to the panel on Friday that his life and those of his clients were being threatened.

He declared the freezing of the protesters’ accounts as a declaration of war by the government.

Ogunlana said, “Why are they boycotting the panel? Why did they choose to boycott the panel? It is because one of them has been sanctioned by the Federal Government via the court.

“These people say, ‘How can you put us on a panel for the purpose of resolving this issue and then you are sanctioning us very drastically?’

“We are talking about financial squeeze; they can’t operate their accounts again; that’s a declaration of war. You know one of the ways of fighting a war is starvation. So, these people are saying you can’t ask us to do a job, promising peace and progress, then you are punishing us. That is what happened. And the law setting the panel up say those young people, representatives of the youth are necessary. So, their presence is necessary for the panel to form a quorum.”

A member of the panel, who spoke to Sunday PUNCH on condition of anonymity, said the panel members generally felt betrayed by the government.

The member said, “Most panel members feel a sense of betrayal by the government. Many of the members are sacrificing their time, reputations and even careers, for this assignment, so that peace can be restored.

“It is unfair on the side of the government to provoke the protesters. Having set up the various panels, the government should not be the one undermining the gallant efforts of the panel members.

“In this regard, panel members view the freezing of the bank account of Miss Rachael Oduala (Rinu) as a direct affront on the integrity of the panel.”

The member said it amounted to “the greatest act of provocation for the government to freeze their bank accounts, seize their travel documents or even arrest the #EndSARS protesters since they embraced dialogue by agreeing to serve on panels set up by the government.

“If this should continue, how will the panel get witnesses to come out openly to narrate their experiences? The government should set good examples and not carry on as if there is no law regulating human affairs. We expect the government to reach out to the youth protesters to resolve all issues with them. The panel cannot sit under the present circumstances,” the member said.

an hour and 7 minutes ago