sinbajo To EndSARS Protesters: Government Is Committed To Police Reforms
By 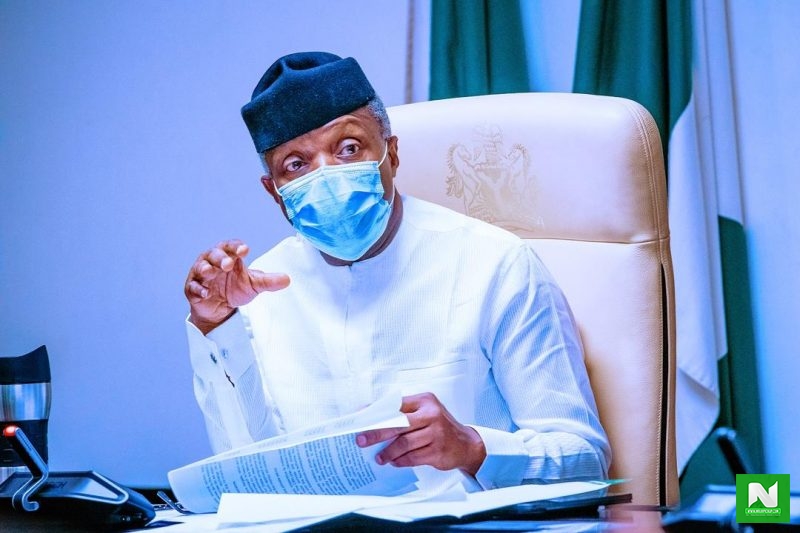 The vice president was specifically asked what message he had for Nigerians still protesting despite the dissolution of the notorious police unit, SARS.

Vice President Yemi Osinbajo has told protesters demanding police reform that the Buhari administration is committed to it.

The vice president was specifically asked what message he had for Nigerians still protesting despite the dissolution of the notorious police unit, SARS.

In response, the law professor said:

“I think the clear message is that there is a government commitment to ensuring that the process of reforms, those who have committed wrongful acts are duly investigated and prosecuted. And that whatever replaces SARS is something that is acceptable, first of all compliance with all of the tenets of the rule of law. And that human right rights…I think these are deep issues that we are all concerned about, I don’t think one person is more concerned than others. I have also been involved in many cases of many young people trying to resolve this kinds of conflicts that have been reported.

“I think it is a good moment for the police force and for all of us to try and reform the police. We are all committed to it.”

When the vice president was asked if the government was willing to meet the demands of the #EndSARS protesters, he said:

“I think the most important thing is that SARS has been disbanded and that the IGP has also committed to ensuring they not only is it disbanded but that whatever takes its place has the full participation of the civil society groups and all other stakeholders.”

Mr Osinbajo then made reference to an earlier statement by Mr Buhari that the dissolution of SARS was just a first step in police reforms his agministration was committed to.

“A few minutes ago, the president also spoke about it and spoke in particular that the disbandment of SARS is only the first stage in a full scale reform of the police force.

“The president has also spoken about the prosecution of all law enforcement agents who must have committed wrongful acts. I think all these are commitment but we must also understand that it’s a process, it is not an event. Reforms is a process and we must all commit to it and must stay focused on those issues.”

The #EndSARS protest started last week with the the demand by thousands of Nigerians for the disbandment of SARS, a police unit notorious for human rights abuses including harassment, extortion and murder.

At least one protester was killed, in Oyo State, as the protest gained momentum across the country over the weekend.

The government finally caved in to the protesters on Sunday with the disbandment of the police unit.

Despite the announcement of the dissolution, however, the protests have continued with protesters expanding their demands to include freedom for everyone arrested during the protests, punishment for erring officers, and comprehensive police reform.

End SARS: Face Of Man Who Shot And Killed Protester In Surulere And Went Into Hiding Goes Viral – See Him Here
Treat Mastorbation: Here Are 15 Rich In Zinc Food To Help Recover Fast
Share to...