Photos of a Mechanic in Kenya and his beautiful girlfriend on Facebook has sparked numerous reactions on the platform.

Apparently, the mechanic had sent money to the lady in an agreement that she will turn up and when the mechanic taught the lady was not going to turn up, the lady availed herself.

In Kenya, it has become a worrying norm as women always request transport fare from their men before they visit and mostly the ladies don’t turn up after the men have sent them transport.

In the photos shared on social media, the lady who looks very classy and gorgeous visited the guy at work and her mode of dressing suggested she was really going out on a date with the guy. 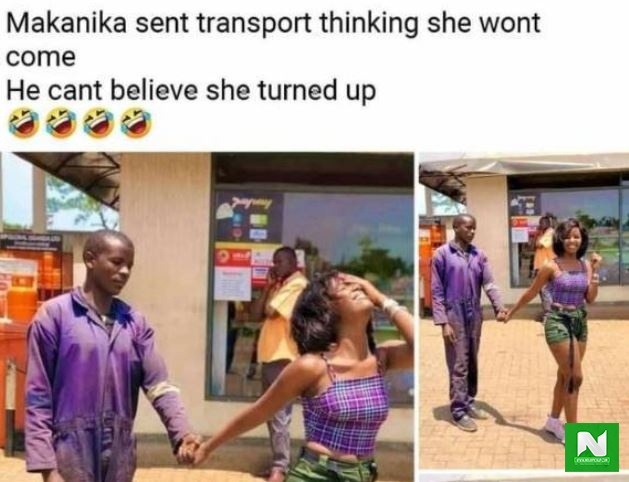 Kenyans who have reacted differently on Facebook and below are some of the comments.

Joko Smoker: This is wonderful!

Monica George’s George’s: This is hilarious!!!

Ray Scotty: Big up to the girls who do not judge wat there love

Pinches Omuse: I wish all ladies could be like that lady

EndSarsNow: ”My Son Was Nearly Kidnapped In Front Of Our Gate”-Omobola Johnson Former Communication Minister
#ENDSARS: ‘Nigeria Gov’t Has Betrayed It People - Rihanna Cries Out For Protesters
Share to...
‹‹‹ 1 Last
(Pages: 1 )
Related topics...