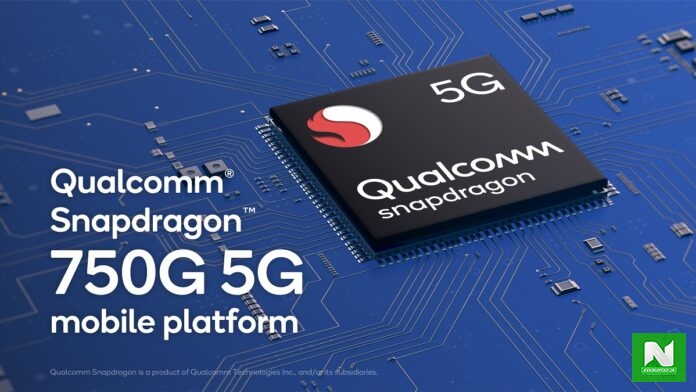 The chipset features an Octa-core Kryo 570 processor which clocks at 2.2 GHz which is 20% better in performance than its predecessor – SD 730G. While Adreno 619 GPU brings a 10% increase in graphics performance. It supports 120Hz display up to 1080p+ resolution. For the efficient rendering of the HDR10 graphics, it is equipped with Adreno HDR Fast Blend and Game Colour Plus.

The camera hardware of the SD 750G can record 4K HDR with bokeh effect and 4K HDR10 video (with HLG). The chipset is equipped with the X52 modem, this is the modem used in the Snapdragon 765 chipset. It also adds mmWave 5G and is capable of reaching 3.7 Gbps in download speed (up from 2.5 Gbps). Also available here is the Sub-6 with multi-SIM support.

The AI hardware of this chipset is capable of delivering up to 4.0 TOPS which is 20% more than its predecessor. It is the brain behind the Noise Suppression (ECNS) technology and Qualcomm Aqstic Echo Cancellation. It has the ability to remove sounds like a barking dog even with a single mic. You don’t have to worry about noise interference when making conference calls from home as it mute sirens or jackhammers. Overall, the audio processing system can turn whisper-level input to a comfortable output audible level.

Chinese OEM Xiaomi has said they will be the first to launch a smartphone powered by the Snapdragon 750G. It is expected to happen before the end of the year. Verizon (the only mmWave carrier in the US) have expressed their excitement for this upcoming chipset alongside Deutsche Telekom.

Tech: Infinix Unveils Hot 10 Device In Nigeria
These Were the Top 2 Nigerian Music Albums of 2021
Share to...