Human Rights Abuse, Others May Work Against Nigeria Under Biden - Ex US Envoy
By 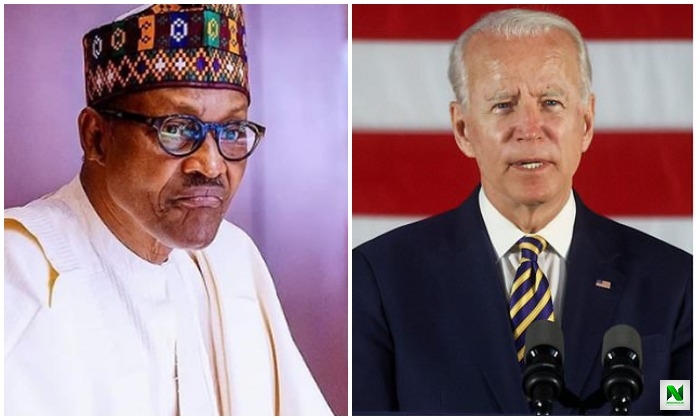 Amid the excitement and expectations of a robust relationship between Nigeria and the United States under the new President, Joe Biden, a former US Ambassador to Nigeria, John Campbell, and some other prominent persons have said cases of human rights abuse in Nigeria can hamper the partnership if not addressed.

Campbell alongside an Associate Fellow at Chatham House, London, Matthew Page and the Director, Africa Programme, Centre for Strategic and International Studies, a leading US think tank, Mr Judd Devermont, told Saturday PUNCH in their responses to email enquiries, that while the relationship between the two countries might improve in many respects, abuse by the military and policy abuse by the government could pose a problem.

Many Nigerians have expressed optimism that Biden’s administration means well for the country as against what obtained during the tenure of his predecessor, Donald Trump, who imposed a ban on immigrant visa.


Though Trump lifted the embargo on arms sale to Nigeria, as imposed by his predecessor, Barrack Obama, he reportedly referred to Nigeria as a shit-hole country and was quoted to have referred to the President, Major General Muhammadu Buhari (retd.), as lifeless.


Meanwhile, amid rising hopes of a better relationship, Campbell noted that the Biden administration would respond positively to African policies that promote a democratic trajectory shaped by the rule of law, with scrupulous observation of human rights.

He added, “Any new administration does indeed provide an opportunity for strengthening the US-Nigeria bilateral relationship. It should be borne in mind, however, that the Biden administration will place much greater emphasis on human rights issues than its predecessor.


“Nigeria’s detention of persons without charge, security service abuses of the civilian population and official restrictions on political activities could inhibit the development of a closer relationship. In my view, that would be a shame, as there are so many areas where close bilateral cooperation and consultation could be productive.


“Specifically, I have in mind the consequences of climate change and how the international community can better respond to the challenges of infectious disease.


“Closer security cooperation would require addressing human rights violations by the security services and outlining a political process that would seek to ameliorate the social and economic conditions that fuel radical insurgencies.”

Campbell said he hoped that the Biden administration would respond positively to Nigeria’s requests for assistance in strengthening the judicial system and the rule of law, much closer cooperation and coordination on matters of public health, and strengthening education, particularly girl-child programmes. “Closer security cooperation would be more difficult to achieve,” he concluded.


In his response to questions posed by one of our correspondents, Page of the Chatham House said the new administration would reinvigorate US engagement with Nigeria and its people, citing how Biden revoked Trump’s “racist immigration ban” on Nigeria and several other African countries on his first day in office.


“These are issues on which the Nigerian government generally scores poorly and dislikes having to discuss with its international partners. So, while the relationship may improve in many respects, areas of friction that have changed little since 2016 – such as the Nigerian military’s human rights record – almost certainly will come back to the fore.

“Nigeria needs deep and enduring security sector reform if it is to decisively defeat Boko Haram. No amount of US weapons and training assistance will help until the Nigerian Army addresses its leadership shortfalls, holds erring personnel accountable for years of gross human rights violations, and roots out rampant security sector corruption.”


He pointed out that from a military standpoint, Nigeria had for decades been a difficult partner for the United States and that this might not change unless Nigeria’s leaders wanted it to change.

He added, “Until a Nigerian president who is willing to reinvest in, reprofessionalise, and reorient the country’s military comes along, I expect the binational military relationship will remain as limited as it has been for some time now.”

Page expressed hope that the Biden administration would broaden its engagement beyond “the dusty, dimly-lit corridors of Abuja’s government buildings” to include more of a people-to-people relationship.


He added, “I know the incoming administration will have a lot of trust-building and fence-mending to do as America emerges from a very dark and shameful episode in its history. Hopefully, Nigeria’s leaders – and Nigerians themselves – will see this as a chance to forge a new relationship that is frank, friendly and more two-way than ever before.


“The Biden administration has already named – or is about to name – highly experienced policymakers to key Africa-focused posts. Under Trump, these posts remained vacant well into his presidency. Biden’s ambassador to the UN, Linda Thomas-Greenfield, is a respected Africanist who served as Assistant Secretary of State for African Affairs and US ambassador to Liberia.”


Buhari had made his historic speech at the Chatham House in London on February 26, 2015, where he promised that “the world will have no cause to worry about Nigeria” if he was elected President.

The Chatham House, also known as the Royal Institute of International Affairs, is an independent policy institute headquartered in London, with the mission to provide authoritative commentary on world events and offer solutions to global challenges.

Also speaking, Devermont stated that he believed there was an opportunity for a more constructive and candid relationship with Nigeria, and that being the region’s largest economy and most populated, Nigeria is a strategic partner for the United States.


He added, “I expect the Biden administration to be forthright about the relationship, speaking out against democratic backsliding, human rights abuses and other systematic problems. I hope there will be a renewed engagement with civil society and a dialogue between our two countries on how we work together to address longstanding division and discord in both Nigerian and US societies.

“Nigeria and African countries should step up as global leaders, using their sway to shape the international community’s approach to democracy, climate change and pandemics. I hope Nigeria will be invited to President Biden’s Summit for Democracy, but it probably will have to show more progress on protecting press freedoms and curbing policy abuse to clinch a spot.”


On the issue of insurgency, he said the Federal Government needed to recommit itself to addressing the underlying drivers of violence, given the devastation caused by insecurity, which had resulted in a significant loss of lives, displacement of millions of people and a reduced capacity to deploy troops to troubled spots abroad.

He added, “If it (Nigeria) shows more consistent political will to do so, I believe there are significant opportunities for a robust US-Nigerian partnership. I would like to see Nigeria as a leading partner in President Biden’s forthcoming urbanisation initiative. As a candidate, Biden committed to help African cities plan for their growth in terms of critical sectors like energy access, climate change adaptation, transportation, and water management. Nigeria is a natural fit for this initiative.”

Nigeria had over the years maintained a good relationship with the United States.

In an opinion published by Sunday PUNCH on October 11, 2020, the US Ambassador to Nigeria, Mary Beth Leonard, recalled how the diplomatic relations between Nigeria and the US began about 60 years ago and the delight of the then President, Dwight Eisenhower, over Nigeria’s independence.

In the article, titled, ‘Reflections on 60 years of US–Nigerian engagement’, Leonard wrote, “Reflecting on President Eisenhower’s recognition of our mutual priorities in global health, economic prosperity and above all else a democratic way of life, I am struck by the continuity of interests in our bilateral relationship.


“Over the past 20 years, the United States has invested $8.1bn in foreign assistance in Nigeria, including more than $5.3bn in health assistance. In 2020, we provided more than $57m in assistance for the COVID-19 response, including US Centers for Disease Control and Prevention epidemiological COVID detection surveys and technical assistance and service plans.”


She noted that in terms of trade, the US was the largest foreign investor in Nigeria and that the two-way trade had expanded to a value of over $9bn, and that as the partnership expands, it had its focus on security and fundamental human rights.

She added, “As we continue to develop and expand our partnership with training and equipment between our militaries, we do so with the singular focus of increasing security while reinforcing democratic institutions with a keen eye on fundamental human rights.”

She pointed out that the US looked forward to “advancing our partnership in shaping fruitful conversations on resolving conflicts which too often take on unfortunate religious and ethnic dimensions.”

Speaking on the knowledge exchange between Nigeria and the US and its strong impact, she stated, “We have benefited from the positive role Nigerians in America have played, just as we look back with pride on how our 60 years of diplomatic relations have blossomed to support a broad array of mutual priorities ranging from agricultural productivity and entrepreneurial knowledge, to strengthening the rule of law across the 36 states of Nigeria.”

In its response, the Ministry of Foreign Affairs said the FG had been addressing the issues of human rights abuse, noting that certain measures were being taken to resolve them among other concerns.

The spokesperson for the ministry, Mr Ferdinand Nwonye, said the Federal Government would continue to engage the US government.

He said, “You know the issues are not new, they have been on the table for some time but I can assure you that the government is addressing them. We will continue engaging the US government.”

In its response, the Ministry of Foreign Affairs said the FG had been addressing the issues of human rights abuse, noting that certain measures were being taken to resolve them among other concerns.

The spokesperson for the ministry, Mr Ferdinand Nwonye, said the Federal Government would continue to engage the US government.

He said, “You know the issues are not new, they have been on the table for some time but I can assure you that the government is addressing them. We will continue engaging the US government.”


Efforts made to get the reaction of the Senior Special Assistant to the President on Media and Publicity, Garba Shehu, on the matter on Friday evening did not yield any positive result.

Shehu had, however, in a statement on Wednesday quoted the President as saying that his regime looked forward to Biden Presidency “with great hope.”

Shehu further quoted the President as expressing the hope that the Presidency of Biden would further strengthen cooperation and support for Nigeria and Africa.

Buhari was quoted as saying, “We look forward to the Biden Presidency with great hope and optimism for strengthening of existing cordial relationships, working together to tackle global terrorism, climate change, poverty and improvement of economic ties with expansion of trade.

“We hope that this will be an era of great positivity between our two nations, as we jointly address issues of mutual interest.”

Soldiers Escort Herdsmen To Ogun Villages, Flog Residents For Rejecting Herders (Pix)
These Were the Top 2 Nigerian Music Albums of 2021
Share to...