Why Buhari Sacked Buratai, Other Service Chiefs - Daily Trust
By 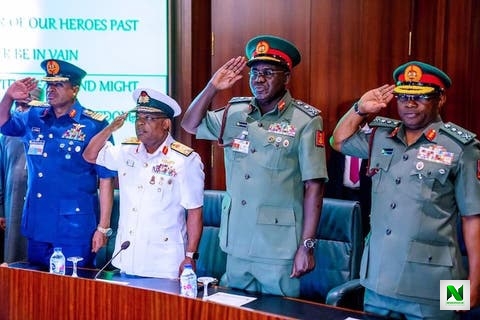 After months of intense calls by the National Assembly, socio-cultural organisations and pressure groups, President Muhammadu Buhari on Tuesday bowed to pressure on the country’s service chiefs.

Sources around the Presidency and the security chiefs said Buhari bowed to pressure following the failure of the service chiefs to ‘properly tackle’ the rising banditry, insurgency and other security challenges bedevilling the country.

One of the sources said since the beginning of this year, the former service chiefs have been expecting their sack considering “widespread disaffection.”

The source close to one of the former service chiefs, who does not want to be named, said: “It is not resignation, they were sacked.

“They have been expecting their sack since the beginning of this year, but nobody told them that this is when it will happen but it is like every day you wake up thinking anything can happen.”

Buhari had on December 18, last year in Katsina State, dropped the hint that the former service chiefs would be fired this year.

“On the issue of insecurity, I am extremely worried about it and I hope next year it will be different.

“Those among the law enforcement agencies that would remain in charge would be extremely busy,” Buhari said shortly before addressing students of Government Science Secondary School, Kankara, who were kidnapped and rescued.

The source said the use of the word “resignation” by the Presidency in describing the exit of the service chiefs was for a reason only known to them.

“Ordinarily, if any of the service chiefs resign on his volition, you will suspect foul play including a coup.

“You are supposed to be suspicious of him because they are the pillars of the country’s security.

“When the pressure was high on the president to sack the service chiefs, I had a discussion with one of them and he told me ‘you know we cannot resign, if we do, it could be interpreted for something else.’

“Nigerians are expecting so much from the new service chiefs because the general opinion is that their predecessors have run out of ideas, hence they could not address the rising insecurity in the country,” he said.

He urged the new service chiefs to demonstrate their capabilities by chasing the bandits, insurgents and other criminals terrorising the country.

“We have the conviction that the Nigerian Armed Forces have the capacity to decimate these terrorists groups but they are just playing politics with it.

“The new service chiefs should strive to get the necessary equipment and necessary attention should be given to the welfare of the officers and men in the war fronts. Soldiers in war fronts are complaining about poor welfare.

“Soldiers should not be in war fronts for five years, two years is enough,” he said.

Another source faulted the claims that the service chiefs resigned, saying “I’m surprised that they are saying they resigned. The issue of resignation should not be part of it.

“They were relieved of their appointment and you know they were there at the pleasure of the president.”

He urged the new Chief of Defence Staff, Major-General Leo Irabor, to take charge of the security of the country.

“To tackle the security challenges in the country, there must be proper coordination of the armed forces. This was lacking,” he said, pleading not to be named.

Court Summons IGP Adamu Over Contempt
These Were the Top 2 Nigerian Music Albums of 2021
Share to...