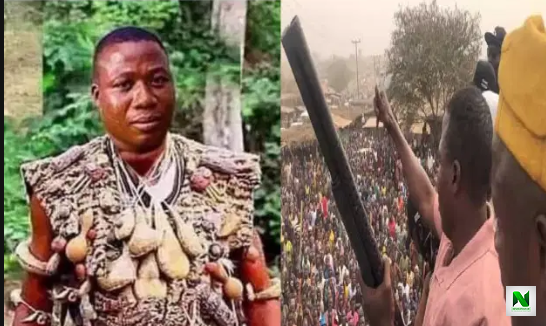 An Oodua Republic agigator, Chief Sunday Adeyemo, popularly known as Sunday Igboho, has narrated how bullets were fired at him at the home of the Seriki of Fulani in Ibarapa, Oyo State, and did not harm him.

Igboho added that suspected Fulani herdsmen killing and kidnapping people in the South-West had done enough and should leave.

Speaking in an interview with popular broadcaster, Kola Olootu, in Oyo State on the notice to quit given to herdsmen ravaging the Ibarapa area of Oke Ogun, Oyo State, Igboho said the gunshots allegedly fired at him failed to harm him.

He described it as a demonstrarion of the efficacy of Yoruba traditional power.

He said, "This is not an issue that affects Sunday Igboho but a matter of concern to the entire Yoruba race. I am saying it pointedly that I am too strong for Fulani bandits to attack or capture, so this matter is not about me at all.

"I don’t have a child who would be kidnapped by Fulani men because my children are not even based in the country.

"When gunshots were fired at me during the visit to the Seriki in Igangan, the bullets did not penetrate (harm me). That shows the efficacy of the Yoruba traditional power.

"It would not be a hard nut for the Yoruba people to crack, rather the evil marauders killing and maiming our people would be visited with retribution as God lives.

"The reason for that was the incessant attacks on our people in the Ibarapa and Oke Ogun areas of the (Oyo) state. Our people are no longer safe in their own land. On the contrary, Yoruba people don’t engage in such atrocious things. You cannot see a Yoruba man going about killing people in Kano.

"In the North, they can behead a Yoruba man for slapping a Hausa/Fulani let alone destroy their farmland. You will recall the case of ‘Oko Oloyun’ (a popular herbal medicine trader) who was killed during a visit to his country house. He was killed at Igbo Ora. The government said it would unravel the facts behind his killing but till now, the matter has not been unravelled. That killing would clock up a year this month."

Igboho identified another victim as Dr Fatai Aborode, who returned from overseas and started farming in Igangan but was killed by herdsmen.

"He employed about 300 people. When his farm was plundered by cattle, he lodged a complaint with the Seriki Fulani. Few days after, killer herdsmen kidnapped him, tied him and butchered him. Nothing was done and no arrest was made.

"That was the story that we heard. After that, they also killed a woman, an Alhaja, a native of Imeko who brought the ransom. Many like that had been killed, including the son to Oba Abdulazeez Adeoye of Igangan. Before getting to Seriki’s residence, you have to pass through three local security checkpoints.

"Now, we are determined to defend our people, but they say we don’t have the right to do so. Some people alleged that I’m doing this to gain cheap popularity; far from it. Some even said perhaps I’m trying to do it to enrich myself, but that is not also correct. The fact is that I am a rich man. I am not seeking favour from the government because I’m a contented person. I don’t need money or favour from the government, but I am from Ibarapa."

Igboho had been in the news since last week when he gave an ultimatum to killer herdsmen to vacate Oyo State.

Days after, violence erupted in the area during which the houses and property of the Seriki Fulani, Alhaji Saliu Abdulkadir, were burnt.

Abdulkadir had told SaharaReporters that he, his wives and children were sent out of the settlement, adding that 11 vehicles and houses were burnt in the process.

The Seriki had thereafter fled the community with his family, as aggrieved youths put fire to the settlement.

Speaking with SaharaReporters, Igboho’s Personal Assistant, Salami Oladapo, had said that neither his principal nor his supporters were responsible for the arson.