List Of Those Wanted By Nigeria Army (Photo)
By 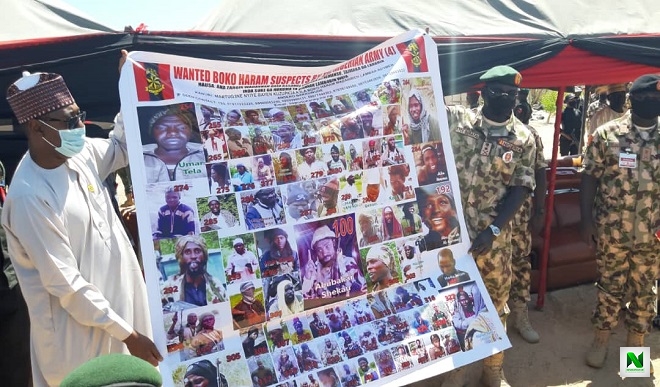 The Nigeria Army on Wednesday launched the fourth batch of the wanted Boko Haram terrorists in which Abubakar Shekau, Abu Mus’ab Al- Barnawi and 79 others made the lists.

Theatre Commander of Operations Lafiya Dole, Maj. Gen Farouk Yahaya disclosed this at Chabbal Super Camp in Maiduguri during the launch of the fourth batch of the wanted terrorists.

“We are here to witness the launching of four batches of wanted Boko Haram terrorists, as you know, this is not the first time, so we will lunch third batch of wanted terrorists shortly.” Yahaya disclosed.

In his remarks Borno State Governor, Prof. Babagana Zulum appealed to the outlawed groups to stop the destruction and embrace peace path.

After his remarks the banners which contains names of the suspects was handed over by the Chief of Army Staff, Lt. Gen. Tukur Buratai to Gov. Zulum.

'I’m The Biggest Artist In Nigeria In Terms Of Everything' - Davido (Video)
Treat Mastorbation: Here Are 15 Rich In Zinc Food To Help Recover Fast
Share to...