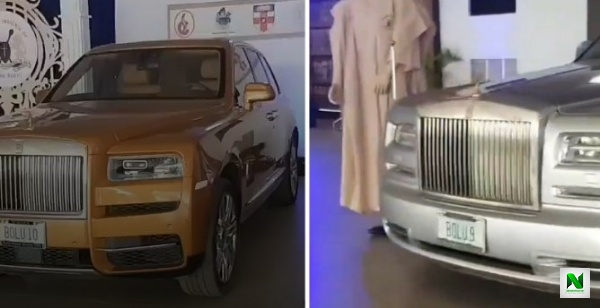 Two Rolls-Royces, clothings and library, belonging to late billionaire and trained lawyer Bolu Akin-Olugbade displayed at his service of songs.

The two luxury Rolls-Royces on display includes Phantom VII and Cullinan, just two of the ten (10) in his garage.

Dr Bolusanmi (Bolu) Adegboyega Akin-Olugbade was laid to rest on Friday February 5, nearly three weeks after the 61-year-old reportedly passed away due to Covid-19 complications at the Paelon COVID Centre, Ikeja, Lagos.

A footage of his befitting burial shows the moment a Mercedes-Benz E-Class “Hearse” ferried the late property tycoon into the site of his final resting place.

Some of his favourite luxury Rolls-Royce rides were also part of the convoy used during his well-attended burial.

A service of songs for the late Ogun State-born businessmen was held on Wednesday February 4. While he was alive, Bolu was known for his passion for high-end Rolls-Royce cars and this was evident during his service of songs.

To celebrate the late trained lawyer and Rolls-Royce collector, two of his luxury cars as well his library of books and clothings, were displayed at his service of songs.

Bolu Akin-Olugbade is the biggest collector of Rolls-Royce in Nigeria and one of the largest in Africa. He took delivery of his first Rolls-Royce in 1984 and by 2019, his garage housed 10 Rolls Royces.

The Aare Ona Kakanfo of Owu Kingdom in Abeokuta had been pictured many times posing with his British-made ultra-luxury cars.