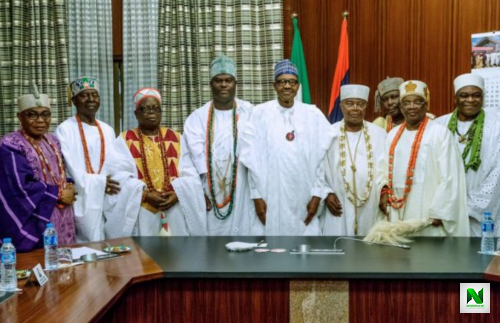 Some Yoruba Kings and traditionalists converged on Ibadan, the Oyo State capital, on Thursday to address the worsening security situation in all the six states of the South West zone.

This came just as a suspected Fulani herder who spied on them at the meeting bolted away as soon as he was detected.

The attendance of the uninvited guest drew the ire of Sango worshippers, hunters who rained curses on him.

His Royal Majesty, Oba Moses Oladejo Oyediran, Ogunsua of Modakeke had scarcely dropped the microphone when one of the organizers announced that “we just discovered that a Fulani herder had just spied on us at this meeting. He had recorded all the proceedings and when he noticed he had been detected, he ran away”.

“All the traditionalists here, you saw what happened. You should do the needful. We didn’t invite him”.

As soon as he said this, the atmosphere of the meeting changed with the participants looking around if there was any other spy.

W.H.O. Disqualifies Nigeria From COVAX Vaccine To Prevent Wastage
These Were the Top 2 Nigerian Music Albums of 2021
Share to...

an hour and 5 minutes ago

an hour and 9 minutes ago

an hour and 11 minutes ago