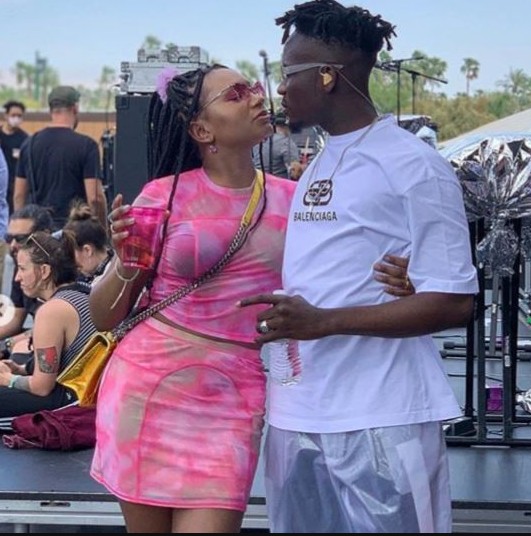 So its no longer news, that billionaire fashion blogger and daughter to Mr. Femi Otedola is in a whirlwind relationship with Nigerian Ghanaian singer, Mr. Eazi, and their relationships of recent has always been the talk of town. Just recently, she celebrated his birthday in a unique way.

1.) Flies A Plane With His Name : This was the height of it to me, when she actually took out time and resources to hire a plane for him, just to welcome him back to the United Kingdom and wish him a happy birthday in 2017.

2.) Supported Him During His Performance : Yes, not once or twice has she had to actually fly out to be with her man during his performance, but the height of it all was during his Coachella performance, where she took out time to wait for him back stage before and after his performance, and went ahead to share romantic pictures of the both of them.

3.) Planting A Peck On Him : You would hardly find many pictures of Mr. Eazi planting a peck on her, but on several occasions, Temi Otedola has planted a kiss on the cheeks of her super star boyfriend to show we affection for him.

4.) Birthday Vacation Celebration : Last year was Greece, this year was Monaco. She flew home to Monaco to celebrate his birthday few days back. The had launch and dinner together and topped it down with expensive Champaign.

Nigeria Will No Longer Tolerate Harassment Of Its Citizens In Ghana - FG
These Were the Top 2 Nigerian Music Albums of 2021
Share to...