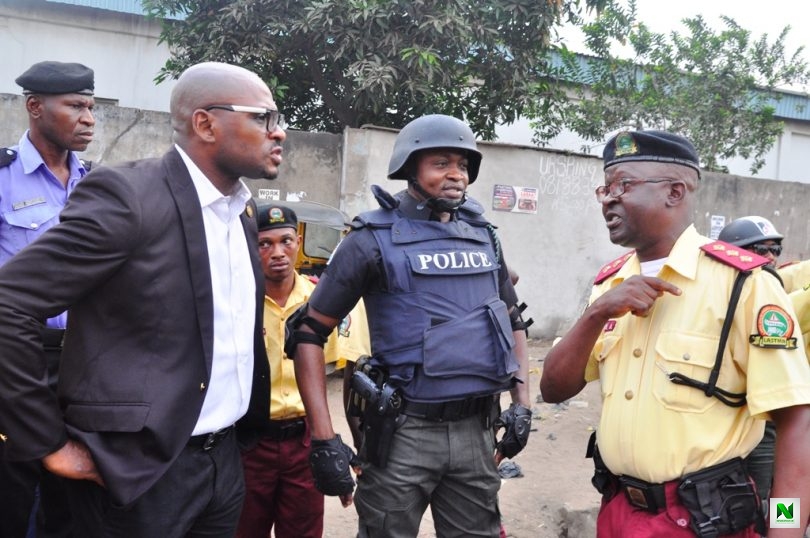 Pockets of military personnel are now sighted around areas where there are public assets like the International Airport, the state secretariat, multinationals, foreign embassies, among others.

Lagos residents now feel unsecure with the absence of policemen within the metropolis. The fear is heightened due to the recent looting and burning of police stations where arms and ammunition were carted away.
Joshua Oladipo said: “I left home today (Monday) for the office and I couldn’t find a single law enforcement officer at the duty post in Lagos. This is a grave risk if hoodlums still see that with the relaxation of curfew, law enforcement agencies are absent.

“I fear for the next wave of insecurity looming in the state, as police weapons have entered into wrong hands after many police stations were attacked and vandalized last week. This is besides the confusion and congestion on the road with the absence of the dreaded LASTMA officers.”

At least, 25 police formations were razed and five others vandalised in Lagos during the violence that trailed the #EndSARS protests last week. The number comprises 14 divisions, three commands and three barracks.

The police command, however, said at the weekend it had started taking stock of the damages it suffered, including the exact number of its men and officers killed and injured during the violence. Reports had it that 40 policemen were injured and a yet-to-be ascertained number killed. Nineteen of the reported injured cops were operatives of the state’s Rapid Response Squad (RRS).

Some policemen who confided in The Guardian expressed displeasure over the way they were treated by fellow countrymen. Some of them are visibly depressed and heart-broken. They say it will take a long while for citizens’ confidence in the police to be restored.

One of them who wants to remain anonymous said: “You people said soldiers are more civil than the police, we have now left you in the hands of soldiers. I don’t want to say more than this. ”

Another said: “I feel ashamed and unhappy to be called a policeman. No one is counting the number of policemen killed during this whole mess. Are we not human beings? Don’t we have the right to life?”

Police sources said the hoodlums did not spare female cops as a handful of them fell victims to their onslaught. One of them said: “We are mourning. We are in pain. They killed our men, our women, and even injured so many others. A lot of those injured are still in the hospital. It was not a pleasant experience.”

Some policemen however have begun some peace-building initiatives. One of them is the Commander of Lagos State Rapid Response Squad (RRS), DCP Tunji Disu. Disu has started pacifying young persons in some Lagos neighbourhoods, urging them to embrace peace and shun violence.
Presently, in some neighbourhoods, members of the Oodua People’s Congress (OPC) and local vigilantes have been engaged to protect communities as well as police formations.

Normalcy has since returned to the Lekki-Ajah area of Lagos, as commuters and residents now ply the road with little or no obstruction. Yesterday, commuters were seen driving through the Admiralty and Ikoyi-Link Bridge tollgates to their various destinations.

For more than two weeks, the protesters had blocked the tollgates, while protesting against police brutality and calling on the government to accede to their five-point demands.

Last week Tuesday, the protesters were dispersed by shootings that caused many injuries following a 24-hour curfew imposed by Governor Babajide Sanwo-Olu on the state.

Some residents expressed gladness that the crisis was over, calling on the state government to ensure the safety of its citizenry. They noted that though life is gradually returning to normal, the upsurge in crime, looting, and brigandage is a cause for worry.

Lending her voice to the whole fiasco, a security consultant and CEO of Crime Fighters, Chief Aisha Tosan, said: “The organizers of #EndSARS protests should have factored in the vulnerability of Lagos environment, considering the fact that Lagos is infested with area boys. The burden of ensuring that the protest was not hijacked by these sets of persons was their responsibility”.

Former DSS boss, Dennis Amachree, told The Guardian that the time is now to overhaul and rebuild the police system. He said: “Considering the current policing system in the country, we can see that this system has overgrown its usefulness in modern Nigeria. The time is definitely ripe for state police as evident with the president’s directive to state governors to restore peace in their respective states.

“The police structure has remained the same without taking into consideration all the new issues and threats that come with policing problems of organization and of course the sophistication of criminals in the nation have not been taken into consideration.

“There are certain moves or certain improvements that have been done in the police but at the same time, these particular innovations are not meeting up to the requirements of the day. I know that with a crime, the police have been able to form other units like SARS.”