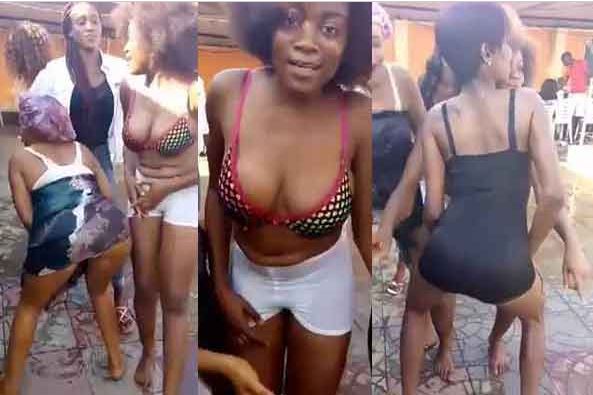 According to recent studies¸ there are between 40 and 42 million prostitutes in the world more than the population of many countries. Available data on Nigeria listed as one of the most religious countries in the world indicates that there were over 103,500 prostitutes in the country as at 2015. Unfortunately these data does not include “side chicks” and a sea of others who offer sex and sex related services for a fee. A prostitute provides pleasure services that compromises public health in Nigeria and often serves as portals for the dissemination of disease and epidemics. Here is a list of 8 diseases you can get from prostitutes, brothels and sex workers:

Syphilis: is a bacterial infection usually spread by sexual contact. The disease starts as a painless sore — typically on your genitals, rectum or mouth. Syphilis spreads from person to person via skin or mucous membrane contact with these sores. If untreated, syphilis remains in your body and may begin to damage the internal organs, including the brain, nerves, eyes, heart, blood vessels, liver, bones, and joints. In about one in 10 of untreated people, this internal damage shows up many years later in the late or tertiary stage of syphilis.

Genital herpes: is a common sexually transmitted infection caused by the herpes simplex virus (HSV). Sexual contact is the primary way that the virus spreads. After the initial infection, the virus lies dormant in your body and can reactivate several times a year. Using protection like condoms can lower your risk of getting an STD BUT condoms wont always protect you from herpes because it can live on areas of the body that arent protected by condoms (like the scrotum, butt cheeks, upper thighs, and labia),

Trichomoniasis (or “trich”): is a very common sexually transmitted disease (STD). It is caused by infection with a protozoan parasite called Trichomonas vaginalis. Although symptoms of the disease vary, most people who have the parasite cannot tell they are infected. The parasite is transmitted through sex (penis-to-vagina or vulva-to-vulva contact) with an infected partner. Women can get the disease from infected men or women, but men usually contract it only from infected women.
According to the CDC, less than one-third of people with trich develop symptoms. When symptoms do develop, they may include: discharge from the vagina or penis, burning or itching around the vagina or penis, pain or discomfort during urination or sex, frequent urination. In women, trich-related discharge often has an unpleasant or “fishy” smell. If left untreated, trich can lead to: infections of the urethra, pelvic inflammatory disease and infertility.

Chlamydia: is a sexually transmitted infection (STI) caused by a bacteria called chlamydia trachomatis. Usually it doesnt cause any symptoms and can be easily treated with antibiotics. However, if it isnt treated early it can spread to other parts of your body and lead to long-term health problems. Women with chlamydia and gonorrhea, two of the most prevalent STIs, may not develop symptoms as such most are not aware they are infected. When symptoms do develop, they often include: pain or discomfort during sex or urination, green or yellow discharge from the penis or vagina, pain in the lower abdomen
If left untreated, chlamydia can lead to: infections of the urethra, prostate gland, or testicles, pelvic inflammatory disease and infertility.
Pubic lice: are tiny insects found on coarse human body hair, such as the hair around your genitals. They are passed on through close bodily contact with someone who has pubic lice and are usually sexually transmitted which is when they move from one person to another during sex. Dirty prostitutes and sex workers are a major source. Common symptoms of pubic lice include: itching around the genitals or anus, small pink or red bumps around the genitals or anus, low-grade fever, lack of energy and irritability.

HIV/AIDS: The virus can be transmitted through contact with infected blood, semen or vaginal fluids. Within a few weeks of HIV infection, flu-like symptoms such as fever, sore throat and fatigue can occur. Then the disease is usually asymptomatic until it progresses to AIDS. AIDS symptoms include weight loss, fever or night sweats, fatigue and recurrent infections. No cure exists for AIDS, but strict adherence to antiretroviral regimens (ARVs) can dramatically slow the diseases progress as well as prevent secondary infections and complications.

COVID 19: COVID-19 is not a sexually transmitted infection, however, it can be passed on through kissing and close contact, including having sex. The virus that causes COVID-19 is mainly transmitted through droplets generated when an infected person coughs, sneezes, or exhales. These droplets are too heavy to hang in the air, and quickly fall on floors or surfaces. You can be infected by breathing in the virus if you are within close proximity of someone who has COVID-19, or by touching a contaminated surface and then your eyes, nose or mouth. If you have sexual encounter with a prostitute infected with COVID-19 you can end up with the disease and transmit it to others.

Liverpool Revealed, We Are Very Serious About Watford Attacker Sarr
These Were the Top 2 Nigerian Music Albums of 2021
TAG : PROSTITUTE KILL YOU DISEASES DAYS THE LAST
Share to...