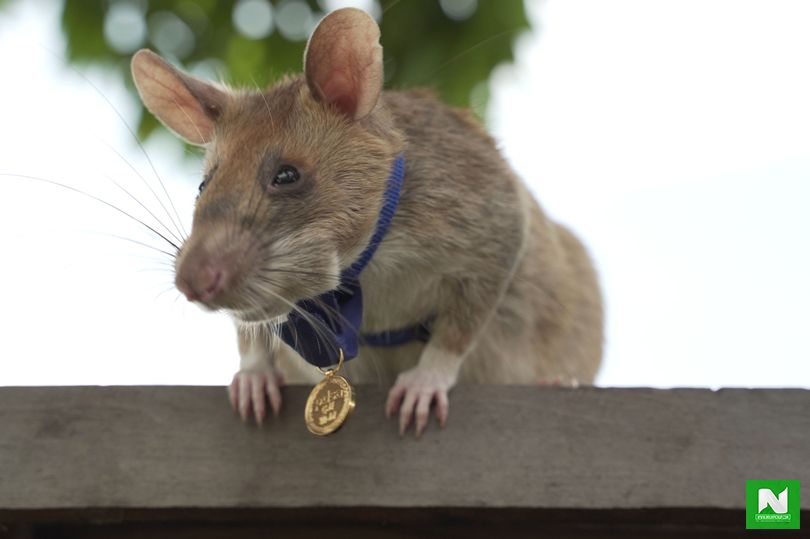 Magawa has broken a 77-year record, being the first rat in decades to receive the huge honour after detecting landmines. He received a gold medal for "devotion to duty"

A rat has been awarded a gold medal for "lifesaving bravery and devotion to duty" after detecting landmines.

Magawa, the giant African pouched rat, earned the medal after clearing over 141,000 square metres of land.

The clever rodent received the PDSA Gold Medal which is the animal equivalent to the George Cross – the joint highest award in the United Kingdom honours system.

Speaking to Sky News, Amy Dickin, the PSDAs awards and heritage manager said: "He will no doubt enjoy a watermelon or two over the weekend, I believe thats his weekend treat.

"And he loves a banana when hes on shift as well so I'm sure he'll be back to work performing his life-saving duties and we're so immensely proud."

Magawa has been trained to detect landmines and tuberculosis by APOPO – the furry animal has become the first rat in 77-years to receive the huge honour in the charitys history.

The award has been given in a bid to raise awareness for countries like Cambodia where landmines are a threat, continuing to injure and kill people.

Between 1975 and 1998, a massive four to six million landmines were laid in the country which has resulted in over 64,000 casualties.

Rats are used to detect landmines due to their intelligence as well as willingness to complete repetitive tasks to earn food.

In terms of danger, they are less likely to be injured as they are small and fast.

They are trained to work for 30 minutes a day after being trained for a year.

The animals can communicate finding a landmine by scratching the top – their intelligence has been applauded by Jan McLoughlin, director general of the PDSA, who says the work by Magawa and APOPO is "truly unique and outstanding".

She said: "Magawas work directly saves and changes the lives of men, women and children who are impacted by these landmines. Every discovery he makes reduces the risk of injury or death for local people.

"The PDSA Animal Awards programme seeks to raise the status of animals in society and honour the incredible contribution they make to our lives.

"Magawas dedication, skill and bravery are an extraordinary example of this and deserve the highest possible recognition. We are thrilled to award him the PDSA Gold Medal."

This is the meaning of the famous tattoo written on the left arm of Nicki Minaj
These Were the Top 2 Nigerian Music Albums of 2021
Share to...