My Husband Abandoned My Daughters & Me Because We Have Blue Eyes (Pix, Video)
By 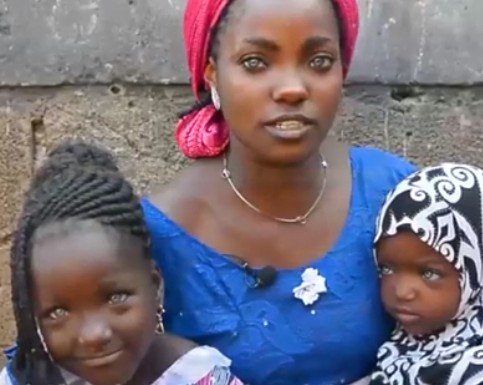 A woman whose husband abandoned her and their kids because they have blue eyes has narrated her ordeal.

A student of the University of Osun, who travelled to Ilorin for the Sallah festivities, brought the familys plight to the limelight after she shared their photos on Facebook. Alabi Afusat explained that she met a family who is naturally blue-eyed and their eye colour made their father abandon them.

The familys story went viral and the mum of the blue-eyed girls, Risikat Azeez-Ayegbami - who is also blue-eyed - shared her story.

Risikat, a mum-of-two from Kwara State, told Punch that she was born with naturally blue eyes. She explained that since it was unusual, her parents took her to the General Hospital where a series of tests were done and it was revealed that her eyes are perfect.

She explained that as she grew older, concerned people kept commenting on her eyes and advising her parents to take her for a medical checkup.

While in primary school, she said her teachers invited her parents and asked them to take her to the hospital to check her eyes. She explained that when her parents took her to the hospital again, the doctors did tests again and told her that there is nothing wrong with her eyes and they are just naturally blue like that of a Caucasian.

She added that the doctors gave her lots of gifts and told her that they love her eyes.

"I can see clearly and theres nothing wrong with my eyes," she said.

Risikat grew older and got married. She gave birth to three girls and all of them inherited her eye colour.

However, she explained that her husband, Abdulwasiu Omo Dada, had a problem with it and abandoned them as a result.

She said he loved her with her eyes at first but after she had their first child and she was born with the same eyes, their relationship changed and it became hard to have a conversation with her husband. It got worse when she had her younger daughter.

"Whenever I attempt to have a conversation with him, he would get angry and walk out on me."

She said that when she got pregnant with her second daughter, things were so hard for them that they couldn't afford food or medical care. She began going to her parents' home to eat and when it was time to have her child, her parents paid her hospital bills.

The second baby came out with blue eyes too and at this point, her husbands behaviour worsened. To make matters worse, his parents also expressed their displeasure with the eyes of his children.

Risikat said: "Even his parents were asking him if he was going to keep having children with blue eyes."

She said her husband began leaving home for days on end. Sometimes, he will be away for a whole week and wouldn't leave money for his family.

She said she began eating at her parents' home again. After the childs christening, she said her parents asked her to leave her husband.

She said that since she left, her husband has not shown up to ask after her or their kids.

#BBNaija2020: “I’m Not A Stealer Of Man, Na Them Dey Rush Me” - Nengi (Video)
These Were the Top 2 Nigerian Music Albums of 2021
TAG : ABANDONED BLUE EYES MY DAUGHTERS MY HUSBAND
Share to...